Statement from the Filmmaker

Bill C-464 became law in Canada yesterday, amending Canada's bail code with a clause giving courts the power to refuse bail to someone charged with a serious crime who is a potential danger to children under the age of 18, an amendment which likely could have saved Zachary had it been in place in 2003. As I said in my original statement below, it was my goal in releasing this movie publicly to amend bail law in Canada; I'm pleased to be able to say that, as of yesterday, that goal is a reality. My sincerest thanks to MP Scott Andrews and Senator Tommy Banks who created Bill C-464 after seeing "Dear Zachary", and saw to it that it became law. I also want to thank the thousands of you who wrote to Parliament in support of our cause; this wouldn't have happened without you.

I've been humbled and overwhelmed by the response to this movie, which has provoked reactions I never could have imagined. Your letters mean so much to me, and I truly thank all of you for taking the time to write. Please stop by the "Bail Reform" section and read a letter of thanks to you from Kate & David Bagby.

Thank you so much for your passionate support, and for helping make the world a safer, better place.

I wish that I had never had the opportunity to make this film. I wish that my friend Dr. Andrew Bagby was alive and well and that I was blissfully ignorant of the lessons I've learned along this journey. Alas, this is not the case. When bad things happen, good people have to take what they've learned and make the world a better place, and that is precisely what I hope this film will do – make the world a better place. 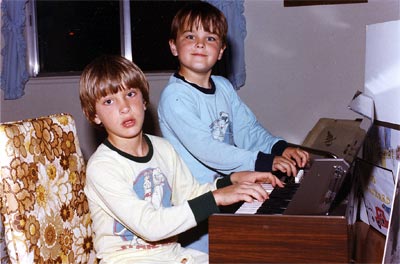 When my close friend Dr. Andrew Bagby (1973-2001) was murdered by his ex-girlfriend, Dr. Shirley Turner, I decided to make a film to memorialize him for family and friends. When I learned that Shirley Turner was pregnant with Andrew's son, whom she later named Zachary, my project took on a whole new meaning. My mission became to make this film for Zachary, as a letter from all of Andrew's loved ones to him, which he could one day view and get to know his father. When Shirley Turner killed again one year later in an unspeakable murder-suicide, my focus changed yet again. A second murder did not have to happen. From 2001 to 2003, Shirley Turner was an accused probable pre-meditated first degree murderer who had fled her home to avoid prosecution, and despite a pile of evidence that she was very likely a manipulative cold-blooded killer, the government of Canada allowed her to walk free on bail for a full year and a half, all the while having custody of a child. I found this situation beyond appalling – that an accused pre-meditated murderer could flee the United States, find refuge in Canada and hang out partying while my friend lay in ashes inside an urn. Mostly, I found it appalling that, knowing how potentially dangerous she was, she was given the opportunity to kill again.

Sadly, this has happened more than once. In 1994, John Cousins and Derek Allen stabbed a man named Marvin Squires to death in Canada. When free on bail pending trial for the Squires murder, John Cousins killed another man, Edward Shaw, stabbing him over 60 times.

The most compelling argument I could make was to tell this story from the trenches. To tell it the way it happened to me, the way it happened to Andrew's hundreds of friends, his family and, most of all, to show the experience his parents went through during this travesty-laden miscarriage of justice. Murders are not news items. They are not statistics. They are gut wrenching experiences that rip apart the fabric of lives and destroy reasons for living, creating a ripple effect that damages thousands of lives and leaves a chilling absence where there once was warmth and love. It is my hope that this film puts people right inside that experience and that no one will be able to come away from it unchanged.

It is my goal to get this film seen all around the world, but in particular by the citizens of Canada. They have the power to prevent a recurrence of this catastrophe, the power to compel their Parliament to deny bail to people accused of murder pending a speedy and fair trial, so that innocent lives are not continually put at unnecessary risk. I will be making every effort to get this film seen by lawmakers in Canada and abroad, where applicable. As Andrew's parents, Kate and David Bagby, have said repeatedly, "The best we can get out of this is change in the future to prevent a recurrence. It's too horrible to let it happen again."

Proceeds from this film will be split between Andrew's two key memorial funds: the Dr. Andrew Bagby Scholarship in Family Medicine at Latrobe Area Hospital in Latrobe, Pennsylvania, and the Dr. Andrew Bagby and son Zachary Bursary at Memorial University of Newfoundland. Both funds are intended to support and encourage physicians who are pursuing Andrew's calling of family medicine. I will also provide copies of this movie to the funds' recipients in perpetuity, so that they can learn about the person who is paying for their education.

In the last phone conversation I ever had with Andrew, he asked me if I'd ever heard the Garth Brooks song "Standing Outside the Fire". I hadn't. He said the song reminded him of me because "I've never thought of you as standing outside the fire." After he died, I was bequeathed Andrew's copy of the album. The chorus is:

Life is not tried, it is merely survived
If you're standing outside the fire

I hope this film will inspire lawmakers and citizens everywhere to take a look at themselves, decide what they stand for and do their best to live a life they can look back on proudly. We are alive. We have the opportunity to do and achieve anything we can imagine. For those who are just surviving – and for those members of the Canadian governmental systems who scrambled to save face in the wake of this tragedy rather than admit error and take positive action – I hope it will inspire them to go forth, use their power for good and jump into the fire.

I hope that you will join me on what has been the most rewarding journey of my life. I believe we can make the world a safer, better place.