Kurt Kuenne is an award-winning filmmaker and composer of both fiction and documentary films. He grew up in Silicon Valley, where at age 7, he met the late Dr. Andrew Bagby, the subject of Dear Zachary. He began making films as soon as he was old enough to pick up a camera; these early films, all of which featured Andrew, became a treasure trove for this documentary. 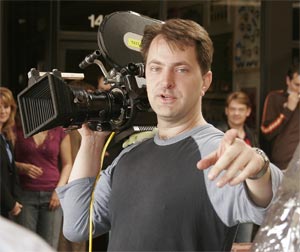 In 1999, he completed his first feature film, the teen drama Scrapbook starring Eric Balfour, which garnered strong reviews, awards and landed him on Filmmaker magazine's annual list of the top 25 new faces of independent cinema. He followed it with Drive-In Movie Memories (2001), a documentary chronicling the outdoor movie-going experience, which opened the 2001 Telluride Film Festival and went on to play more than 45 festivals before becoming a popular hit with PBS audiences in the United States.

In 2002, he won a Nicholl Fellowship in Screenwriting from the Academy of Motion Pictures Arts & Sciences for his screenplay Mason Mule, while his screenplay Explode made the quarterfinals in the same year. He then directed an ongoing series of award-winning black & white short film comedies - Rent-A-Person (2004), Validation (2006), Slow (2007) and The Phone Book (2008) - which collectively played more than 120 festivals the world over and won more than 40 awards. The most popular film in the series, Validation, starring TJ Thyne of the hit TV show Bones, garnered more in prize money than the film's production budget and went on to become a cult hit on YouTube, where it has remained one of the site's top rated films of all time.

As a composer, in addition to his own films, Kurt's work includes re-scoring the restoration of the silent classic Cyrano de Bergerac (1925), for which the original score was lost; his score was premiered by the San Diego Symphony and has become a perennial fixture on Turner Classic Movies and French television. He also scored the Luke Wilson thriller Bad Seed (2000) and the Douglas Spain indie film Hunting of Man (2002). His score for Dear Zachary was nominated for Best Documentary Score of 2008 by the International Film Music Critics.

Kurt's new feature film Shuffle, starring TJ Thyne of Validation, won 10 awards at 2 dozen film festivals the world over from 2011-2012, is now available in theatres from Gathr-Theatrical on DemandSM and on home video from Screen Media Films. Kurt recently adapted Frank Beddor's New York Times bestseller The Looking Glass Wars into a musical for the stage and completed the short documentary The Legacy of Dear Zachary: A Journey to Change Law.